Election Day is the first Tuesday after the first Monday of November. You must be 18 years old to vote. The next presidential election is in 2020, and again every four years. The presidency of the United States is a four-year term with a two-term limit. The President of the United States sometimes referred to as POTUS, is in charge of the executive branch. He is Commander-in-Chief of the nation’s armed forces, ensuring that our country is kept safe.

The Constitutional requirements to be president are:

The Constitution does not elaborate on whether the 14 years can be cumulative or consecutive. John F. Kennedy was the youngest person elected president; he was 43 years old when inaugurated in 1961. 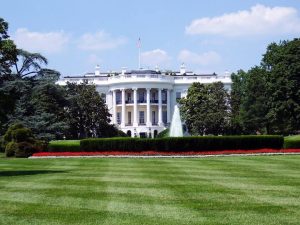 Powers and Duties of the President

The president approves and vetoes laws enacted by Congress. When Congress sends him a new law, he may or may not agree to sign it. When the president declines to sign a bill, thus preventing it from becoming law, it is known as a presidential veto. POTUS lets Congress know about new laws that the executive branch believes the country needs, and uses his or her political influence to get them passed.

POTUS makes agreements, called treaties, with other countries. A treaty is a formal, written agreement between sovereign states or between states and international organizations. Treaties require the advice and consent of the Senate to receive ratification.

Current President of the United States

President Donald J. Trump is the current head of the executive branch and the Commander-in-Chief of the United States military.

Previous articleJudicial BranchNext article How Constitutional Amendments Come to Be