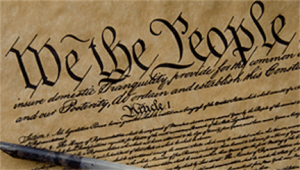 The 27 amendments to the Constitution are:

Amendment 1—Preserves the basic freedoms of religion, speech and assembly. Also preserves the freedom of journalists to publish and the rights of individuals to petition the government in the case of ill-treatment or injustice.

Amendment 2—Protects the right of individuals to own firearms.

Amendment 3—Prevents the government from forcing private citizens to feed and house soldiers in their private residences.

Amendment 4—Protects individuals from having personal property seized by the government without a valid indication that the person has committed a criminal act.

Amendment 5—Provides legal protection for individuals by establishing due process. Also prevents indefinite detention without being charged with a crime, being tried more than once for the same crime, and testifying against oneself. Also prevents the government from seizing private property for public use without fair compensation.

Amendment 6—Guarantees a person who is accused of a crime access to a lawyer and to a speedy trial with a jury.

Amendment 7—Guarantees the right to a trial with a jury in federal civil cases.

Amendment 8—Prevents a criminal from being penalized with unreasonably harsh punishments.

Amendment 9—Acknowledges that other rights exist besides the ones that are specifically mentioned in the Constitution.

Amendment 10—Asserts that any issue not mentioned within the Constitution is left up to the states or to individual citizens.

Amendment 11—Provides protection to states from lawsuits by non-citizens of that state.

Amendment 14—Clarifies the rights of citizenship in the United States. Also addressed several issues created by the American Civil War.

Amendment 15—Established and protects the voting rights of all races of Americans.

Amendment 16—Permitted the government of the United States to collect taxes based upon income.

Amendment 17—Changed the method of appointing United States Senators from selection by the legislatures of the respective states to election by the citizens of each state.

Amendment 18—Prohibited the production or sale of alcoholic beverages.

Amendment 19—Established and protects the voting rights of women.

Amendment 20—Modified the dates of the Congressional term and the Inauguration of the President.

Amendment 22—Established a two-term limit for Presidents. In the event a President comes into office because of the death or resignation of the previous President the total amount of time that can be served as President is 10 years.

Amendment 23—Provides for representation for Washington D.C. in Congress.

Amendment 24—Abolished the practice of charging a fee or tax for voting.

Amendment 25—Established the specific government officials that may become President in the event of the death or resignation of both the President and Vice President.

Amendment 26—Lowered the age of voting to 18.

Amendment 27—Provided that any increase in Congressional pay will not take effect until after the next election cycle.